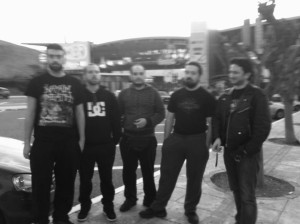 Ixpapalotl is a death/grind band from Athens , Greece. The members are : Trollg on bass, KJ on vocals, NuclearK and Bugass on Guitars and Nol on Drums.

Our music is influenced by bands like Cannibal Corpse ( early days ), Suffocation and Napalm Death. Due to such influences, we made an “ old school “, more organic approach to the sound of this EP, keeping our material clean from over-production. The lyrical themes derive from the social / political structure of the world around us. Our songs express our view on human rights, protest and revolt, going against racism, fascism and any other kind of discrimination.

We are a DIY band by choice, and our philosophy is simple: we compose songs, fulfilling our need to create music and express our social viewpoint, performing as best as we can and share it with as many people as possible. We have a respect for each person’s taste and we understand the fact that music (and any other form of art) is perceived differently among individuals.

All our material are in digital form and can be downloaded for free from our website (http://kjo666.wix.com/ixpapalotl ). Live dates, news, physical copies etc are announced from our facebook page (https://www.facebook.com/Ixpapalotl ).

We have all been friends since childhood and we have been first playing in 1998, in various thrash and death/grind bands. Most notably, our drummer at the time was playing for Chemical Disease, a crust/punk/grindcore DIY band. We formed Ixpapalotl in 2008. In 2009 we released our first EP „That of the Swamp“, a 3 track mini CD that was well met by critics and audience alike. On June 2012 we started the recordings for our new EP „CorpseRepublic“. Today we are once again planning on live shows and composing new material.