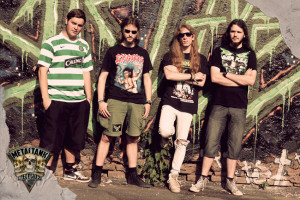 The Slovenian Bay area thrash metal maniacs Panikk just finished the recording of their upcoming album which is scheduled to be released in early 2013 on Metal Tank Records under the name of Unbearable Conditions.

The band comment: we finally finished the recording of Unbearable Conditions. The overall recording went smoothly, in fast mood and with no dramatic issues. We already heard the very final result and the entire crew is both excited and thrilled about what months of recording gave birth to: a lethal dose of fast, old school and untamed thrash metal. We are pretty sure that all of you enjoying tunes from legendary acts such as VIO-LENCE, EVILDEAD, SEPULTURA, DEMOLITION HAMMER, FORCED ENTRY and ACID REIGN will dig our latest effort at 100%.

Below you can preview „Panic Attack“, the first single taken from the album.