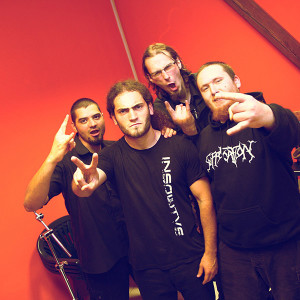 Insolitvs is an instrumental quartet based in Varaždin, Croatia. Formed in 2006 by already prolific local musicians, the band played an array of shows in a short time, and gained both experience and influences, leaving their music to evolve by the day. In an effort to do things as they used to be done “back in the day”, Insolitvs decided to make their name on the road before recording yet another low-budget home-recorded demo. This finally led to the making of their first release – the CD “Op. I”. Recorded in 2010 (recorded and engineered by Tomislav “Tompa” Novosel, mastered by Igor Malečić for Maisterwerk Productions), “Op. I” marks the highlight of their career so far. Combining relentless death metal with a wide range of genres – ranging from classical music, to latin, smooth-jazz, folk melodies etc – the four musicians have justified their road-reputation, and managed to capture on CD all the anger and the intensity that has become a trademark of their shows! Released in 2010 in Croatia by the band themselves, “Op. I” is now re-released through Layered Reality Productions, and available world-wide!

The members of the band are: