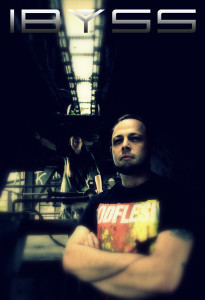 German Industrial-Metal newcomers Ibyss have recently released a first Remix-single for Last Stitch off their self-produced debut album Obsidian:
The track has been remixed by Frank Rotten, the mastermind behind the German band
Reactive Black.

Additionaly, their debut album offers ten songs, with singer Jens and guitarist Nihil reviving the long forgotten sound of bands like early Godflesh, Pitchshifter and Ministry.
Hypnotic riffs driven by static, yet blowing drumloops, dominated by simple and aggressive vocals. „Obsidian“ was made to sound like an echo from a distant past. The stunning artwork was done by well-known German artist Pixelbreed (who worked for acts like Ostfront, De:ad:cibel etc ), while the videoclips have been produced by German underground-artist Ghostfog (who worked for and with Liquid Grey, Fragile Child, Chord Of Souls etc.)

Fans can purchase the remix for only 1,00 Euro and the digital album for 5,00 Euro including artwork, fotos and a „making-of“ video at Bandcamp:
https://ibyss.bandcamp.com/
Streaming at Soundcloud: https://soundcloud.com/ibyssband/sets/ibyss-obsidian-final-mix